New York City’s Central Park–a man-made natural area in overdeveloped Manhattan–is one of the best birding hotspots in North America. We explored the park for ourselves one May weekend. 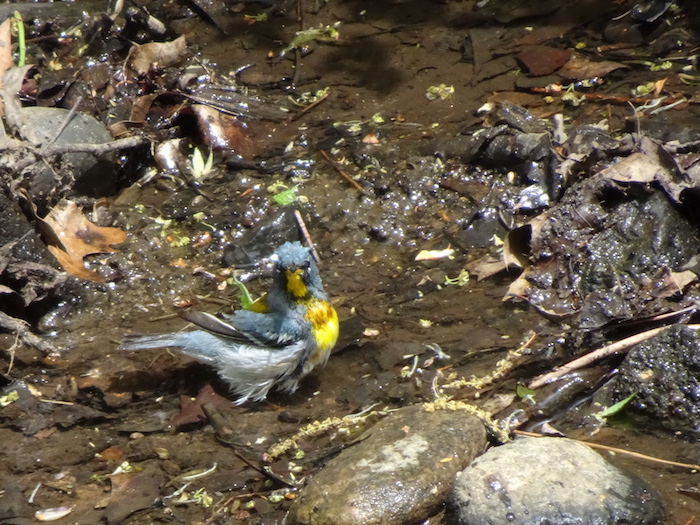 A male Northern Parula bathing in a brook.

There’s a scene in Birders: The Central Park Effect in which novelist and birder Jonathan Franzen describes noticing, for the first time, the park’s trees bejeweled with songbirds. New World warblers–the quintessential songbirds to many–are, in fact, the park’s strength during spring migration, although many other types of birds spend time there as well.

Sadly, Central Park is good for birding because Manhattan is otherwise barren of nature. This park of human design, complete with artificial lakes and streams, is what’s known in the birding world as a “migrant trap”, a green space that serves as a critical stopover along a migration flyway. 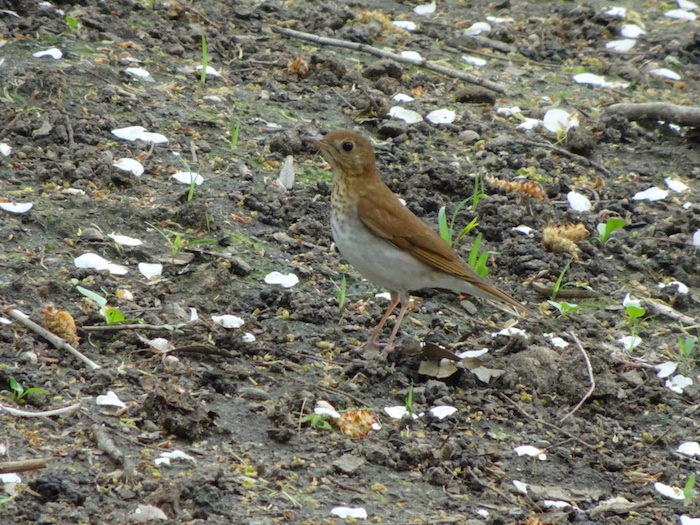 One of several Veeries we saw in Central Park. The Veery overwinters in southeastern Brazil!

“Migrant traps” like Central Park or Galveston’s Lafitte’s Cove can give one the false impression that bird populations remain large and diverse, even though a large percentage of bird species have declined precipitously since the mid-twentieth century.

I’ve long since learned that the success of a birding adventure, as with many things in life, depends heavily on strategy and serendipity. I now maximize my chances of seeing particular families, genera, or even species by using eBird–a powerful tool for planning birding trips–along with forecasts of weather and wind speed/direction (especially important along the Gulf Coast during spring migration) to figure out when and where the birds will show up. 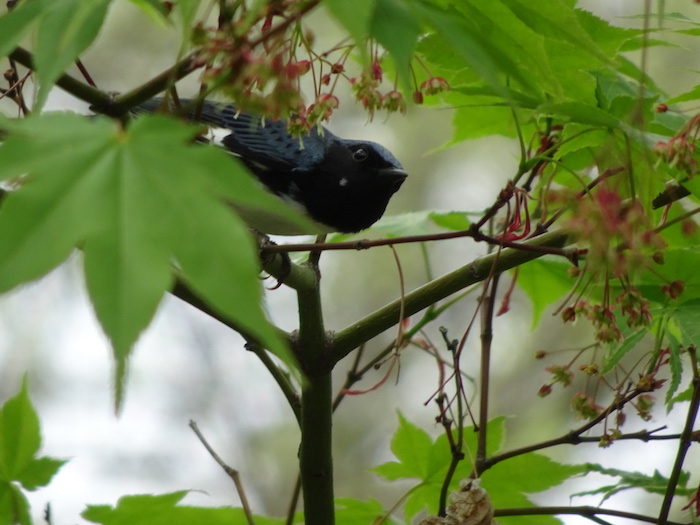 We specifically timed our trip to see the Black-throated Blue Warbler, a “life species” for us and one frequently observed in the park in early summer. We saw several “BT Blues”, along with twenty other warbler species, over only a day and a half of birding a few hours each day! We observed seventeen warbler species in a single day, an impressive number anywhere in North America.

The park was not a “river of warblers”, as one man experienced this spring in Quebec, but it was a personal record: I’ve never seen so many warbler species in so little time. Additionally, it seemed to me that nearly all the songbirds we encountered at Central Park were singing all day, each day we were there. 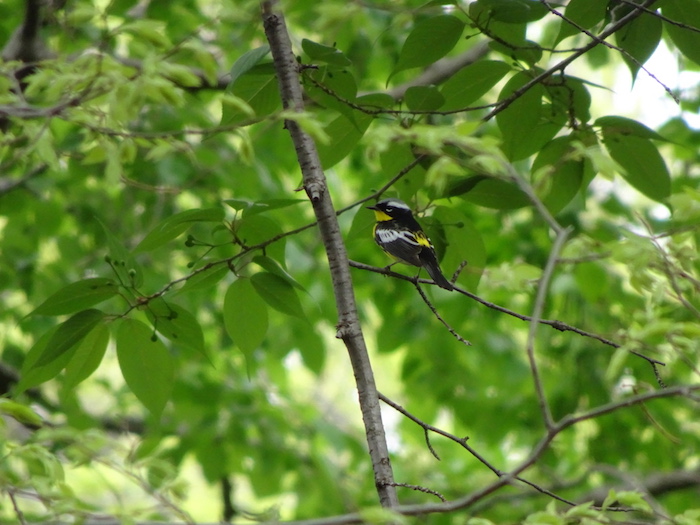 From the men’s restroom, I heard this Magnolia Warbler singing nearby and soon managed to photograph it.

While birding the park, I noticed that many of the Upper Texas Coast’s common birds–such as Yellow-crowned Night-Heron, White-eyed Vireo, Summer Tanager, and Prothonotary Warbler–are rare there and given special attention by the birding groups we encountered. A man spontaneously came up to tell me the location of a recently-sighted Prothonotary Warbler, showing me his photo of it. A woman asked me if I knew which species she was viewing. She was delighted when I told her it’s a White-eyed Vireo, a common bird along the UTC in spring and summer, but apparently much rarer in Central Park. 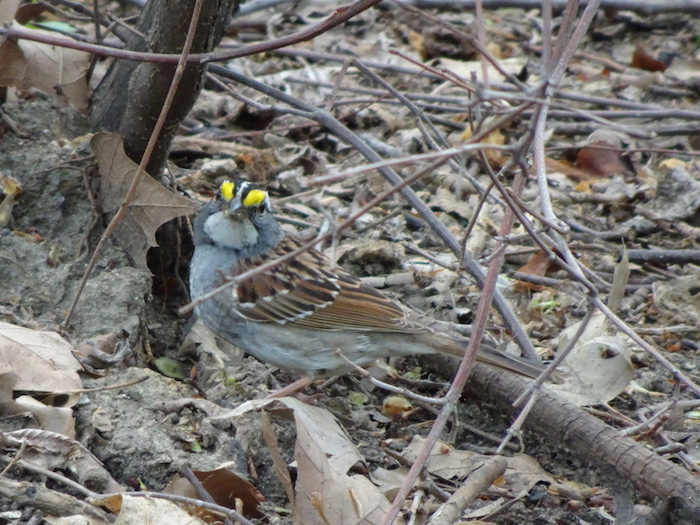 White-throated Sparrows, headed for their boreal breeding grounds, seemed ubiquitous in the underbrush.

We met several other friendly birders there, including a small group of women who showed us a Red-headed Woodpecker they’d just sighted. I helped someone else see a Nashville Warbler. She recommended the Manhattan Bird Alert (on Twitter), to which a young male birder nearby, possibly high-school-aged, replied, “it keeps me alive”.

A very nice feature of birding is its open, collaborative nature. It’s fun to share real-time observations while birding in a small group, and everyone usually ends up finding more species than they otherwise would. Birders become fast friends, their common source of joy connecting them across vast political, age, class, and other differences. 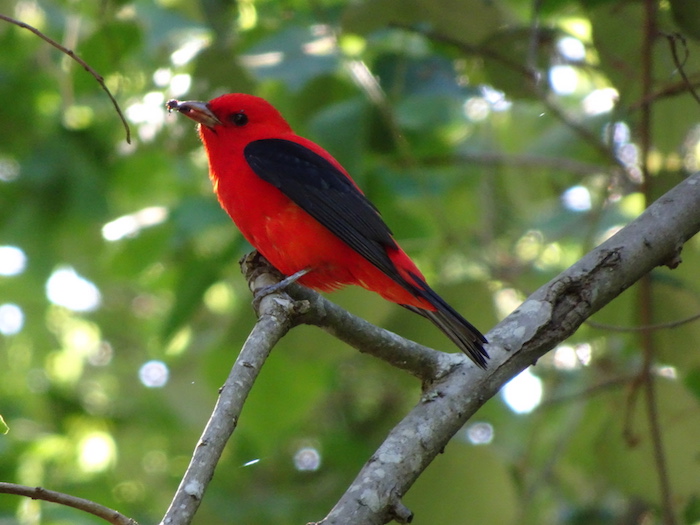 The Scarlet Tanager, one of the most beautiful birds in North America and the most common tanager species in Central Park in season, is drab yellow-brown on its overwintering habitat in South America. It molts into its brilliant red plumage by feeding on carotenoid-rich fruits during spring migration.1 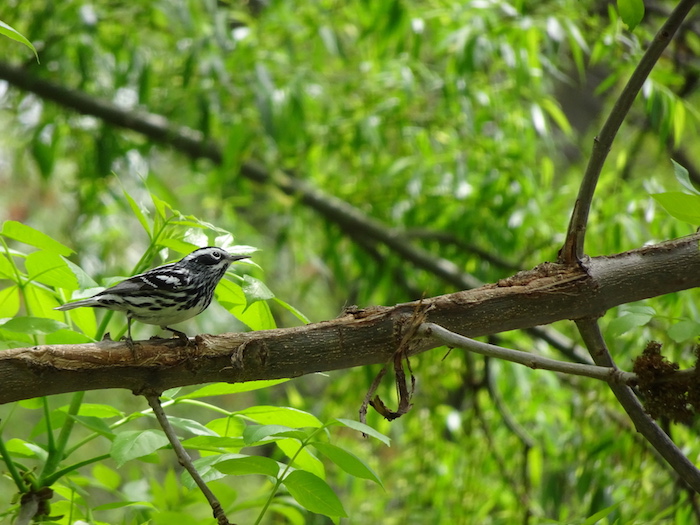 The Black-and-white Warbler, among the warbler species I most frequently see, appears to creep over tree trunks and branches like a woodcreeper or a nuthatch.

We didn’t visit the Central Park Zoo. You might wonder why, since there are many exotic animals at zoos that one will never see elsewhere. Some of them, perhaps, are more superficially interesting than one’s local fauna. Although the modern zoo is a fascinating place that preserves a small fraction of global biodiversity that would otherwise be irrevocably lost, the experience of observing wild animals in their own respective elements is very different from that of observing them at even the most progressive of zoos. If you’ve been to a zoo multiple times, you may have noticed how stressed the animals appear during crowded days. There’s a profound difference between observing a king vulture sitting gloomily behind bars while children scream at it and seeing it soar high above you in its natural habitat as you hike near Costa Rica’s Volcán Arenal. 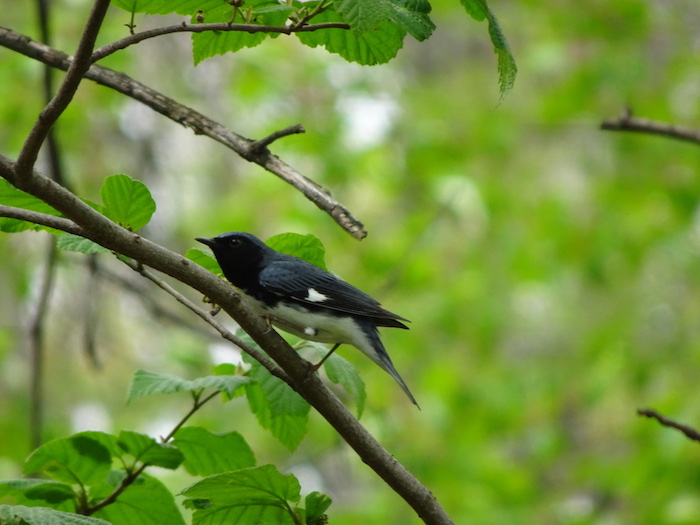 One of the many Black-throated Blue Warblers we saw foraging at eye level.

I’m now fully aware of the wisdom in starting each day of life, or even each hike, with low expectations. Low expectations minimize disappointment and maximize happiness. If I expect to observe no birds at all while out in nature, even seeing or hearing one bird will be a special experience. Seeing many bird species, then, as one does in the right places during spring migration, feels downright miraculous. One need not be in Africa to go on safari.