We took two weekend trips beyond the Upper Texas Coast (UTC) this spring, one to Lost Maples State Natural Area on the Edwards Plateau, and another to New York City’s Central Park.

At Lost Maples, which is named after a beautiful Ice Age relict, we were fortunate to see the “very local” Black-capped Vireo as well as the uncommon, Ashe Juniper-dependent Golden-cheeked Warbler. The Golden-cheeked Warbler has a staggeringly small population: approximately 21,000 breeding individuals worldwide, according to Partners in Flight. The entire population nests in central Texas. Of all the neotropical warbler species that spend time in the US, only the Kirtland’s Warbler appears to have a smaller global population. The Black-capped Vireo is only slightly more prevalent than the Golden-cheek at 24,000 breeding birds. Compare these numbers to the population of the near-threatened Painted Bunting: 14,000,000. 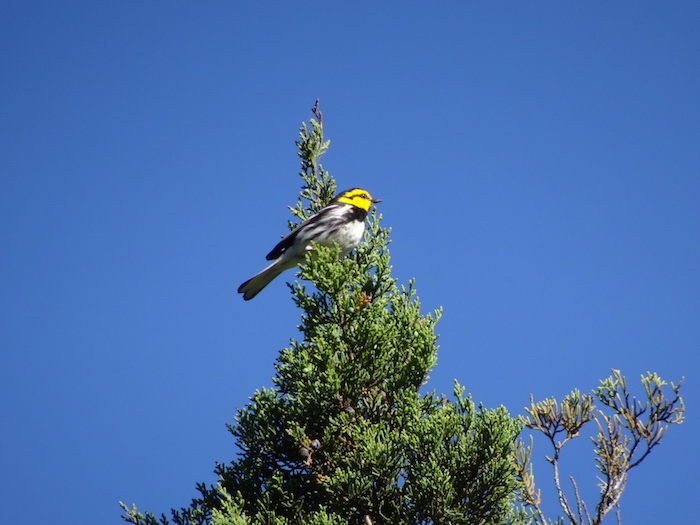 To my great surprise, the Golden-cheek was one of the first species I saw at Lost Maples. As I observed a mixed flock of birds, a male serendipitously flew onto the end of a small branch of the tree directly in front of me, providing nice views! I took photos in which it was partly hidden and didn’t get another good view of this species–even though we heard it a few times every day during our hikes–until our last morning there.

Given the development frenzy all over central Texas–one of the fastest-growing areas of the United States–as well as the loss of overwintering habitat in Central America, I don’t know if these birds will be around in fifty years. 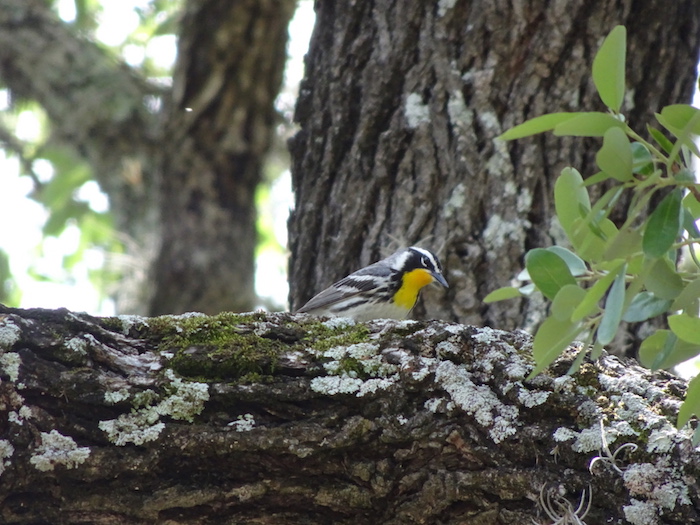 What struck me most about Lost Maples and its surroundings, including Foxfire Log Cabins, where we stayed only a mile away from the park, was the incredible amount of birdsong we heard. I’m glad I spent the prior several weeks learning bird songs while driving. The aural knowledge I built up during that time was put to good use: from the beginning of our stay to the end, I constantly heard Yellow-throated Warblers and Bewick’s Wrens singing, followed in frequency by Summer Tanagers, Carolina Wrens, Northern Cardinals, Yellow-throated Vireos, Blue-headed Vireos, Red-eyed Vireos, Canyon Wrens, House Finches, Black-and-white Warblers, Golden-cheeked Warblers, and Chipping Sparrows, roughly in that order.

At one point during a hike, a hidden Louisiana Waterthrush sang brightly from the stream below us. At night, we heard Eastern Screech-Owls and Chuck-will’s-widows. 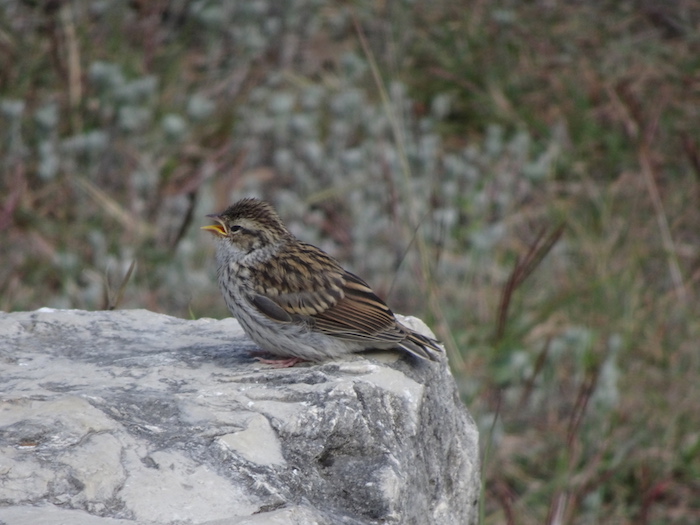 Only moments before, a parent foraging on the grass fed this fledgling Chipping Sparrow beak-to-beak!

We don’t have a comparably great diversity of birdsong along the UTC because most songbirds are on their way north or south much of the time; few songbirds summer here. During the trip, I realized that eastern, northeastern, and northern forests must host an incredible diversity of birdsong in the spring. (I confirmed this hunch in May.)

The printed bird list given to us by park headquarters appeared outdated: it listed Yellow-throated Warblers as rare, which definitely did not seem to be the case. Our entire party saw this otherwise difficult-to-see species at one time or another. They are common in eBird listings there, and are present in nearly every bird list at Lost Maples from April. 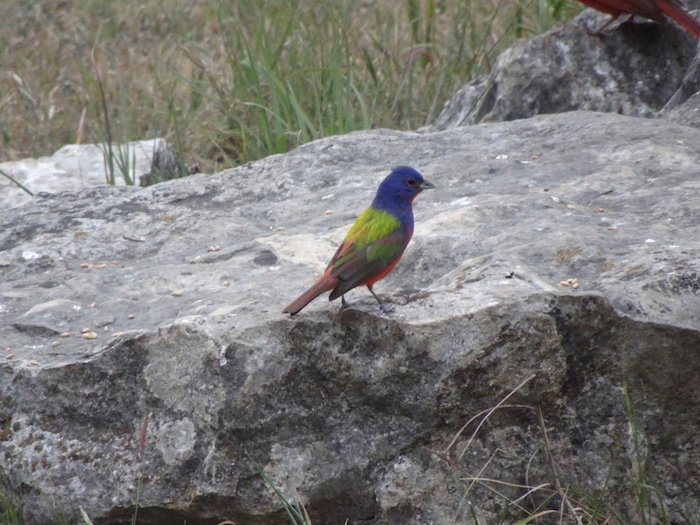 The only Painted Bunting we saw that weekend.

Bird populations can shift significantly over even relatively short time spans: the chief naturalist of our local nature center tells me that Bald Eagles returned to our area in 2008, and that other commonly-observed species, such as Eastern Bluebird and Crested Caracara, were not historically present here. I personally documented nesting Tree Swallows over multiple months at our nature center this spring and summer, a finding inconsistent with the established breeding range of this species and that suggests the breeding range is changing.

Spectacular view. Black-capped Vireos and a Blue Grosbeak sang nearby.

At Lost Maples, finding the Black-capped Vireo required a strenuous hike up a particular hill. (Lost Maples is best hiked with trekking poles and a reasonable degree of fitness.) From atop this hill, we witnessed a stunning view of the path we had taken to the peak. We heard multiple Black-caps, both along the hilltop and the hillside facing the vista, but all were hidden in scrub. Suddenly, a male popped up onto a Texas Persimmon. He looked around, vocalized, allowed me to get some photographs, and then disappeared from view again. The Golden-cheeked Warbler and the Black-capped Vireo are both life species for me, despite having spent most of my life in Texas! 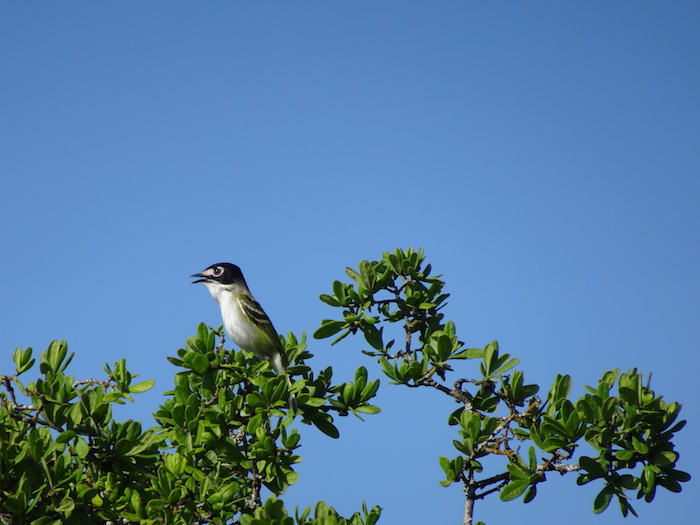 This male Black-capped Vireo surprised us with quite a show.

We also encountered many of the expected springtime bird species of central and southwestern Texas, such as Blue Grosbeak, Painted and Indigo Buntings, Ash-throated Flycatcher, Scott’s Oriole, Clay-colored and Lark Sparrows, and others. 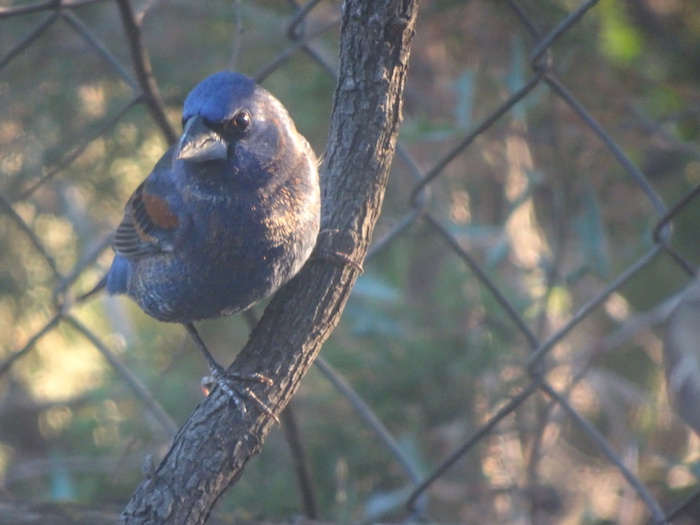 Overall, we observed sixty species at or near Lost Maples and a Wild Turkey near the city of Bandera, topping out at sixty-one species for the area that weekend. My single-day record for the park was fifty species.