Spring migration is long since over along the upper Texas coast (UTC). And what a migration it was: on the first Sunday in April, it was 40-something Fahrenheit, bone-chillingly cold by Texas standards.

Nevertheless, in a mere two hours at Lafitte’s Cove, my friends and I saw four vireo and at least eleven warbler species (even a male Cerulean Warbler!), a few Indigo Buntings, several Blue Grosbeaks that disappeared soon after arriving, Orchard and Baltimore Orioles, and a Scarlet Tanager. Though minor, it was the first fallout of spring migration and lasted an entire week. Nearly all of the migrating warbler species of the Central, Mississippi, and Atlantic flyways, including the Black-throated Blue Warbler, were observed by various birders over a span of two days that week at birding hotspots in Galveston and High Island. 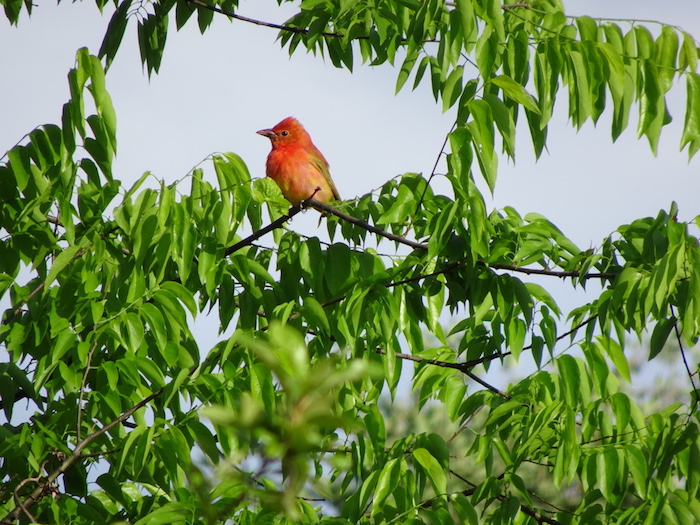 The following weekend, there was another fallout at Lafitte’s, this time of Indigo Buntings: we counted approximately forty-five in a two-hour period, along with a male Summer Tanager glowing red-orange in the setting sun, Blue-winged Warblers, Short- and Long-billed Dowitchers, a Pectoral Sandpiper resting and refueling on its way from South America to the Arctic Circle, a resplendent male Painted Bunting in fresh breeding plumage that kept popping in and out of a patch of woods with a male Blue Grosbeak, and many other species. The next day, a couple of my birder friends showed me another life shorebird on its way to the Arctic tundra: the Stilt Sandpiper. 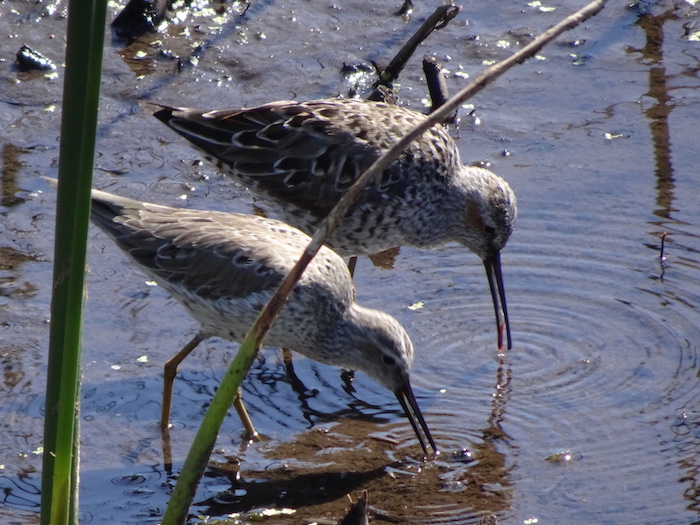 One of the most amazing things about birding during a fallout, even minor fallouts like the ones we observed this spring, is the constantly changing composition of the avifauna. Different people birding the same area on the same day observe different mixes of species. For example, during the first fallout, people who showed up thirty minutes before me saw a Bronzed Cowbird (very rare regionally, but often seen at Lafitte’s) and a Sora, neither of which I saw that day, and they observed more Blue Grosbeaks than I did. Those who showed up thirty minutes after me missed the grosbeaks entirely. The diversity of species was so great and changing so rapidly as birds came and went that everyone saw different stuff. We didn’t even bird half of the tiny oak motte nor the prairie trail at Lafitte’s, yet easily got a minimum of fifty-seven species in a couple hours. I saw stuff others missed, like Kentucky Warbler and Scarlet Tanager. Others saw a Swainson’s Warbler, which is rare and elusive and which I’ve never encountered. Yet others saw a Prairie Warbler, similarly difficult to observe and which I had never seen until we visited Central Park (NYC) in May. 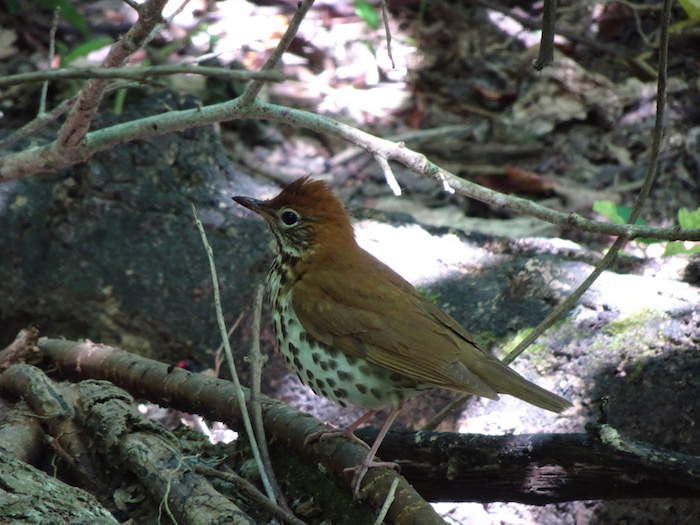 We experienced our final UTC fallout this spring on the last weekend of April, where, on a short hike through High Island’s Boy Scout Woods, we saw all of the major brown thrushes of the US and Canada: Hermit, Wood, Swainson’s, and Gray-cheeked Thrush, as well as Veery. Along with Ovenbirds (a thrush-like warbler), they were all over the ground; we almost had to watch where we stepped, in case one was underfoot. We saw more Ovenbirds and thrushes in an hour there than the average person will notice in ten lifetimes anywhere. Later that afternoon, at Smith Oaks Sanctuary, in a mere hour and forty minutes, we saw seven Blackburnian and twelve Bay-breasted Warblers, far more than I’d ever personally seen in one place. 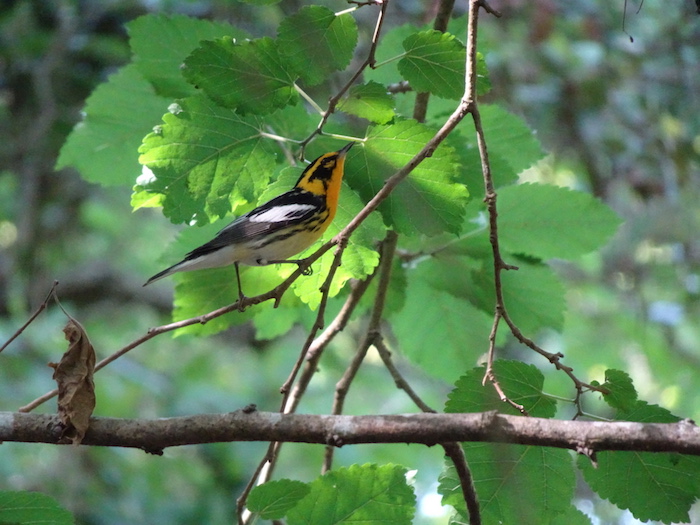 This Blackburnian Warbler foraged a few feet from us, unafraid.

We ran into another rare bird there: Victor Emanuel, legendary birder, bird tour operator, and organizer of the famous Freeport Christmas Bird Count! He was there with a friend, in search of a Golden-winged Warbler–one of his favorites–seen earlier by others. We confirmed it had been seen, but not by us. He tipped us off to a male Blackpoll Warbler seen along the rookery trail and then went on his way. We soon found the Blackpoll, followed immediately by a male Prothonotary Warbler, both with the help of the Tropical Birding guides. (They were giving one of their free daily spring migration bird walks.) We saw many other bird species at Smith Oaks and even stumbled upon a large beehive. 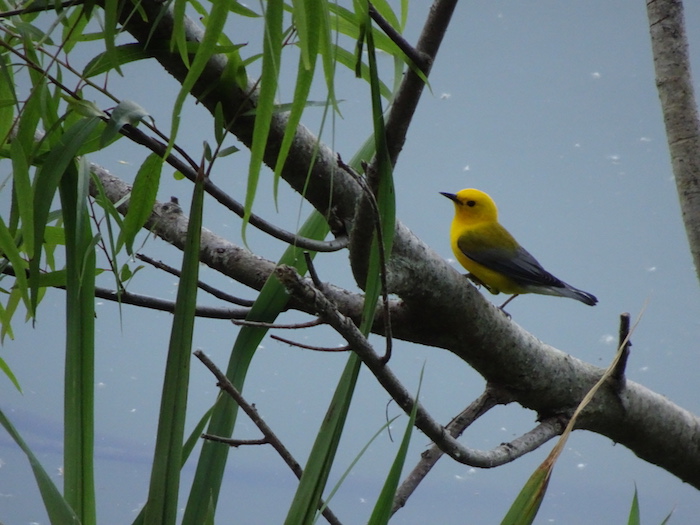 That weekend, among the eighty-eight species we observed, seventeen* were warblers. It was the richest birding experience I’ve ever had at High Island.

*Maybe eighteen, if I really did hear a Connecticut Warbler sing briefly–there have only been a handful of historical sightings along the UTC, though, so it’s quite improbable. 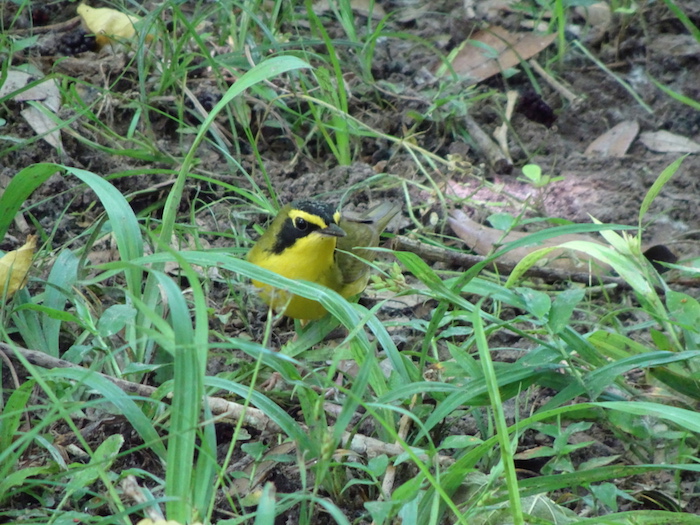 An inquisitive Kentucky Warbler at Boy Scout Woods. The Kentucky Warbler is declining rapidly, along with Wood Thrush, Prothonotary Warbler, and many other species affected by deforestation and other human activity.

Here are the eBird lists referenced in this essay, along with a few others: